Drawing the face is one of the most difficult challenges in fashion illustration that every designer has to deal with. After you learned “How to draw profile face” in this tutorial you will master an easy technique to draw it from the front view. You won’t have to leave the face blank anymore. Go follow those simple steps and make her beautiful!

How to draw faces in 13 steps:

Draw a circle and mark its center. Don’t push too hard with the pencil.

Draw another one on top of it. The second circle should overlap the first one and touch its center. Put a Centerline for both the circles.

Draw a smooth and graceful line connecting the chin with the last point before the circle starts to narrow. Try not to splay the lines too much, keep them close to the blueprint.

Finish the outline of the head by joining the circles. It the middle of the space between the nose and the chin draw a horizontal line. Draw two lines with about the same length as the mouth. Start from where the two circles cross each other and continue towards the Centerline. The space between the eyes should be approximately equal to the size of each eye.

In the half-way between the nose and the mouth draw a short line indicating the upper lip. Put another line in half of the mouth-to-chin distance. A bit under the eyes you already marked draw parallel lines.

>You’ll add glamour to your illustration if you keep the eyes not too large and opened. Fashion faces love cat eyes. To learn more check the instructions on how to draw eyes for fashion sketches

Close the eyes as shown. Stay away from the head outline. Draw a wide “U” where you marked the upper lip and repeat it upsized in the middle of the mouth Centerline.

Smooth the eye’s sharp angles as shown. Finish the mouth. Use the marks you already have drawn and start from them. It looks better if you don’t pull the lines of the lower lip right to the mouth Centerline. You can draw the lips closed or slightly opened – it looks extra glamorous.

Draw the nose tips where you initially marked the nose. Hint the nose tip and the bridge.

Just under the lower lip put a short line that will indicate the chin. Draw the cheekbones pointing towards the nose. Keep soft and close to the eyes. The eyebrows will go up until they reach the blueprint circle and then curve however you want their shape to be.

Divide the eye into three parts. Draw two half circles in the second 1/3 of the eye. Finish the eyebrows. Leaving them too fine they will make them look unnatural. Check “The importance of eyebrows in fashion design sketches” for examples of different types of eyebrows you can use for your models.

Put the ears starting from the eye line to the nose tip. The ear is frequently covered by hair, but you might need them. The necks of fashion illustration models are longer and thinner than normal. Start the neck from the line where the lower lip ends and make it at least half headlong. Finish her eyes. Put the makeup paying attention to the original shape of the eyes you’ve drawn.

Divide the forehead in 3 and fill the first part with hair. Be creative and give your beauty a lovely hairstyle of your liking! You might like the “How to draw curly hair” or “How to draw glam hairstyle” tutorials for your muse.

The same face base looks so different with different hairstyles. Try your own and have fun!

Did you enjoy this tutorial? If so, go click at the button bellow and enhance your skills further with my full online course on ‘How to Draw Faces‘!

Mistake 1: The jaw starts too high and the face looks triangular. Start the jaw a little bit lower and make the lines soft, close to the guidelines.

Mistake 2: The eyes are too separated. Always leave some space from the eyes outer corner to the head outline and distance equal to about one eye between the two.

How to draw Black Girls 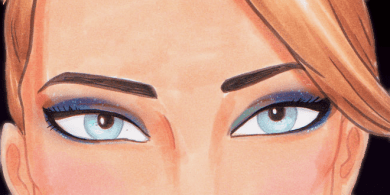 How to draw makeup 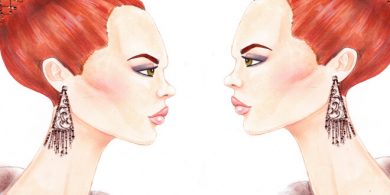 How to draw a profile face

Be the first to know when we publish new tutorials, contests and more!

You have successfully joined our family of fashion lovers.